INTRODUCTION
The old brewery is located in the city of Jindřichův Hradecin the southern part of Czech Republic. The building was built at the end of the 16th century by the nobility. During the years the building has undergone many reconstructions and modernisations, which can be seen in the layering of different architectural styles. In the 19th century the brewery was producing 30 000 hectoliters of beer per year, but after the first world war the production started to decrease and finally in 1967 the brewery closed completely. Since then, the brewery has not been in operation and the building was turned into a warehouse. In 2011 the building suffered extensive damage due to a fire and is in need of a renovation.

The old brewery is converted into a cultural center with a variety of functions for the people of Jindřichův Hradec to enjoy. On the ground floor there is a restaurant and a microbrewery, honoring the history of the building. On the first floor there is a big concert hall, which can be used for many different kinds of events. There is also a gallery with temporary exhibitions. On the second floor there is a workshop space where students or different hobby groups can come and work. The workshop space is connected to accommodation on the third floor, so both spaces can be used together.

The conservation and renovation of the building is done in a respectful manner, using similar materials and colors as used before. The main architectural change is a big glass roof, which brings lots of natural light and creates a special atmosphere in the workshop and concert hall. Although being a big change to the original state of the building, the glass roof does not disrupt the beautiful front facade. Some of the most recently built parts of the brewery are removed, restoring the original shape of the building. In the interiors, the main architectural goal was to highlight each of the different types of spaces, keeping them as open as possible. The restaurant is a big, open, vaulted space, the roof of the workshop space has a beautiful wooden structure, and the concert hall which was most damaged by the fire, is now a three-story high open space. 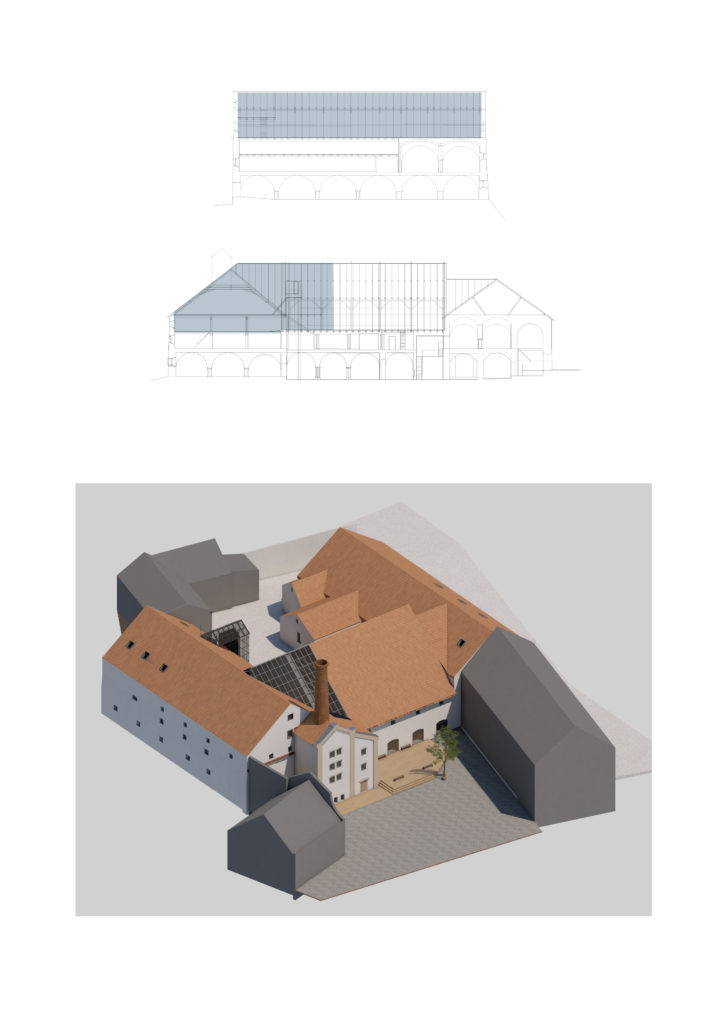 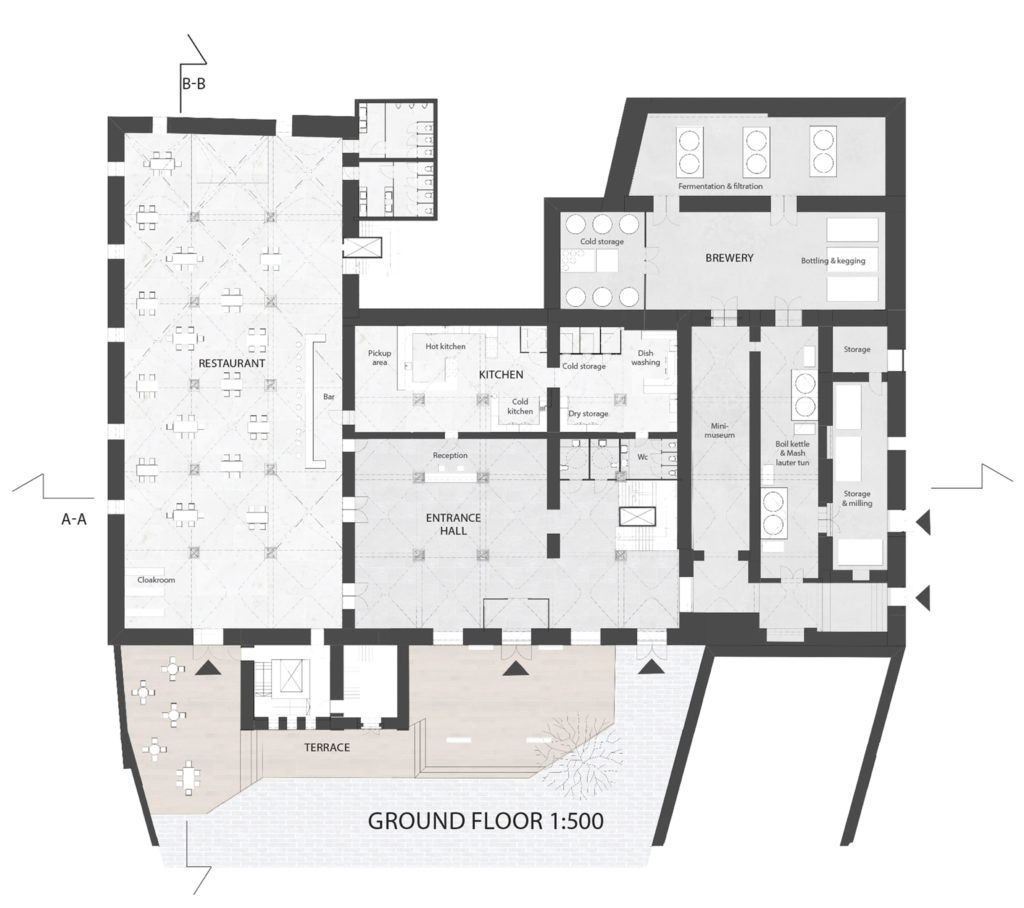 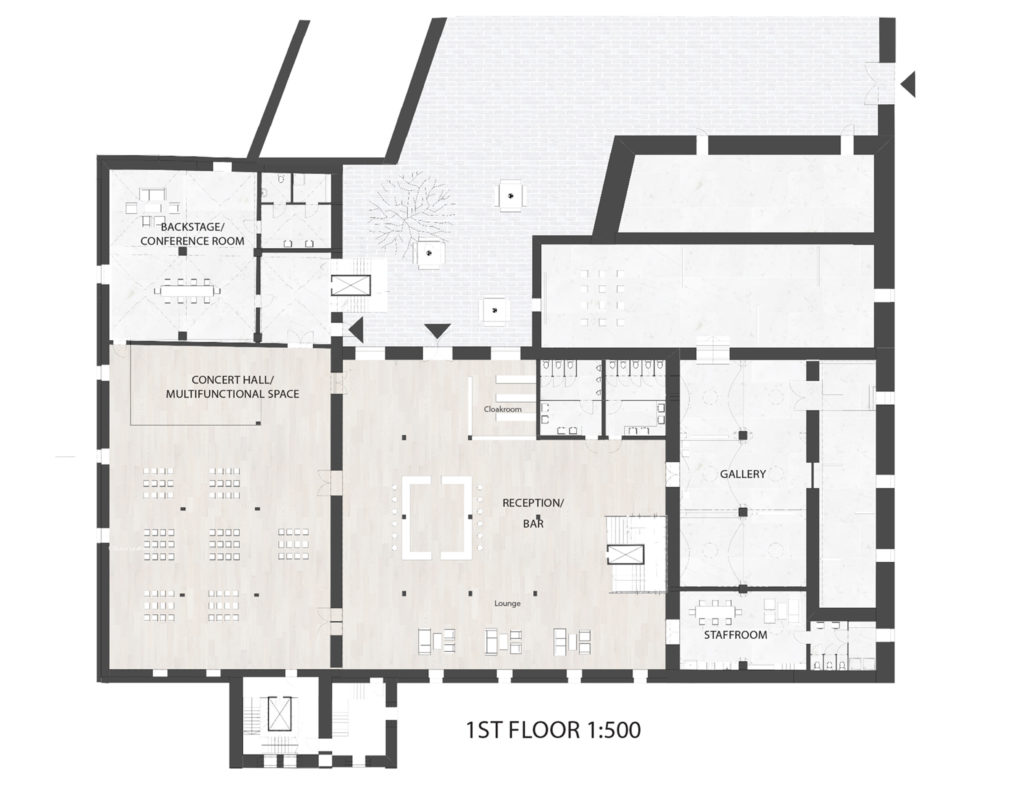 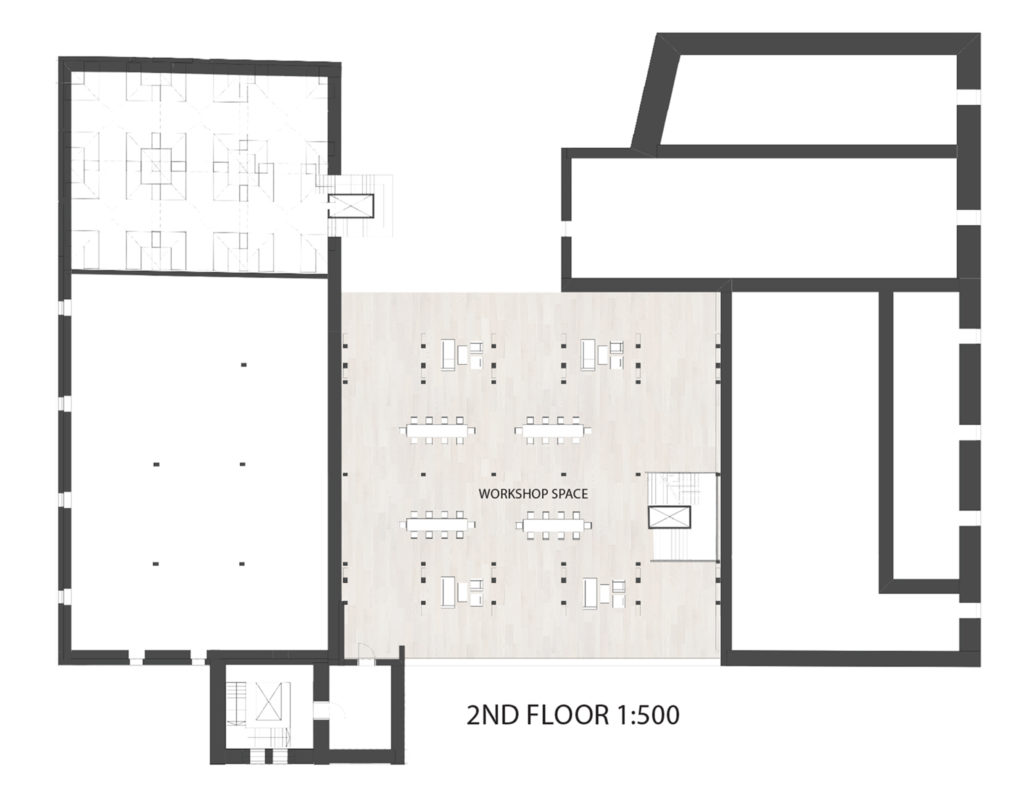 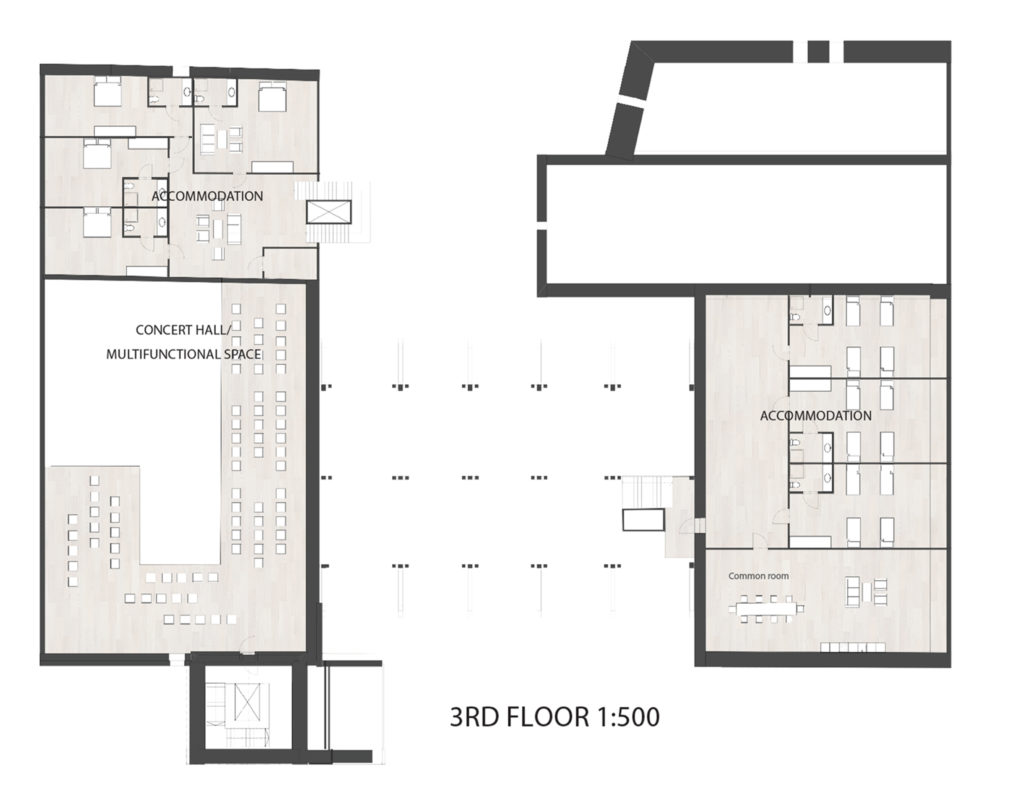 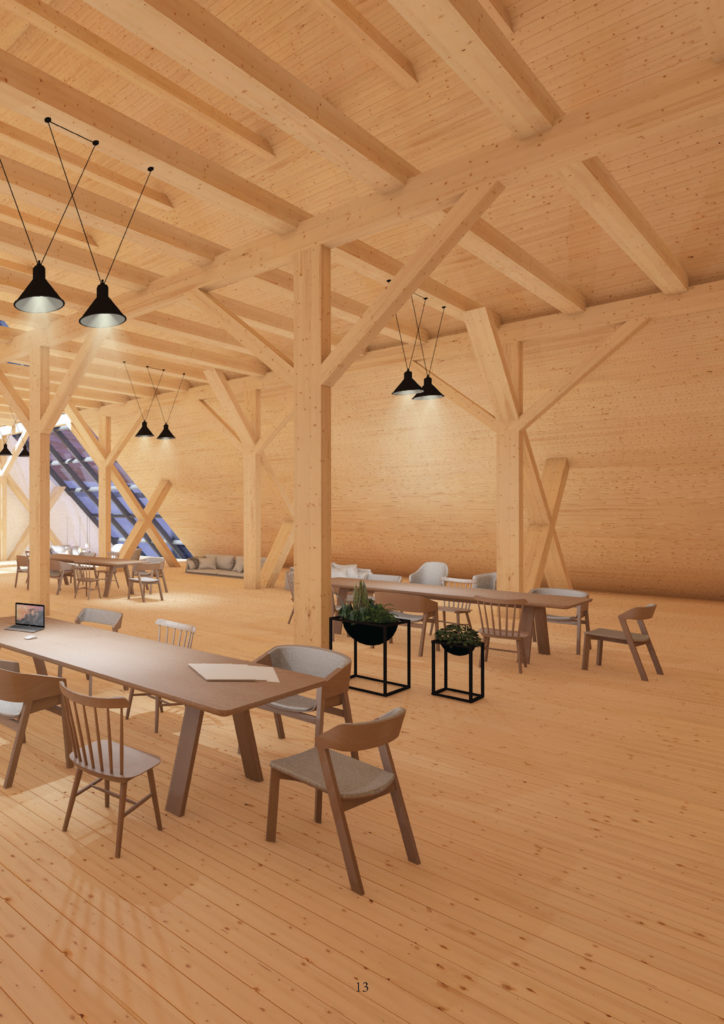 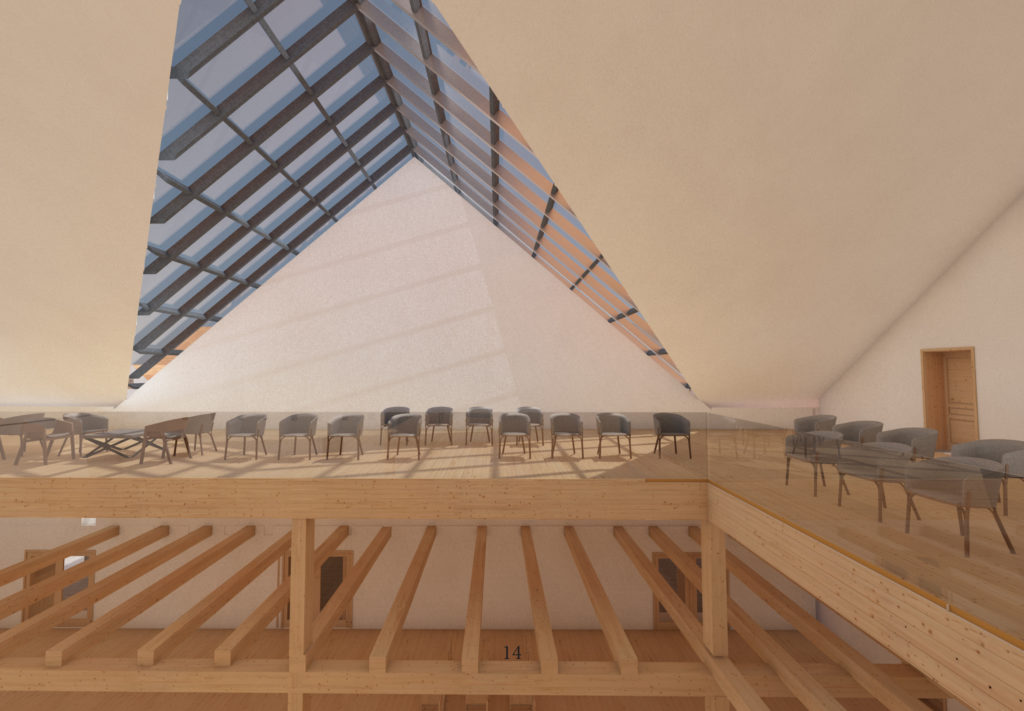 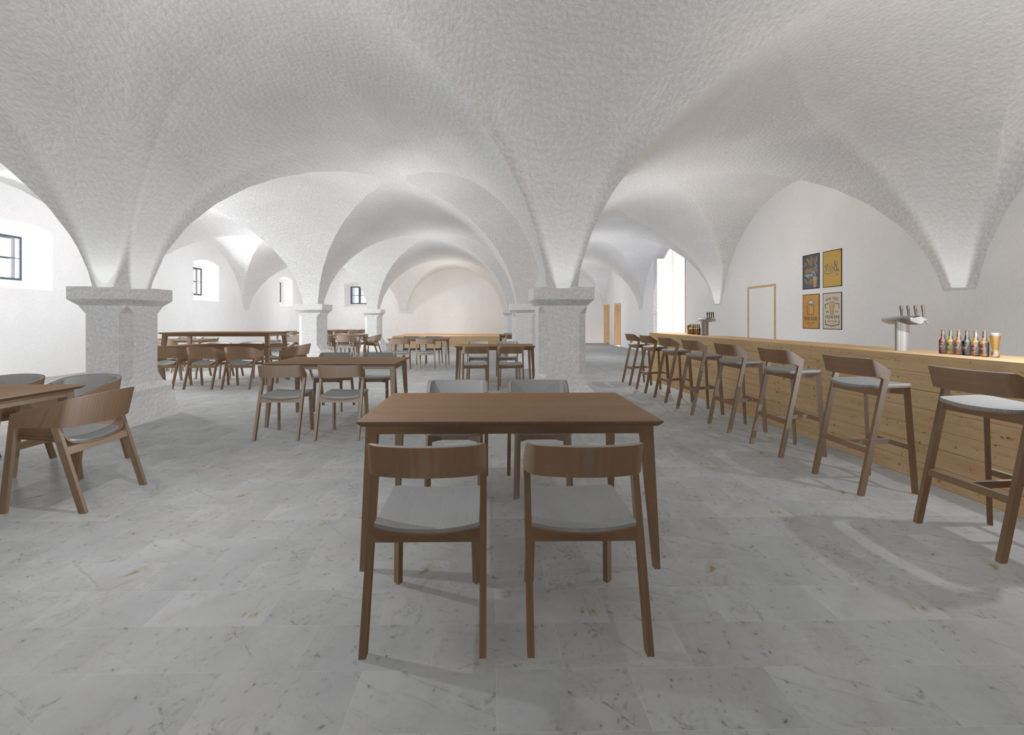